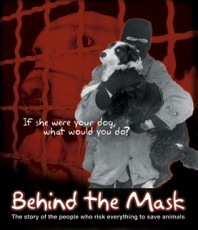 Outside of perhaps snowmobiling or winter camping, balaclavas generally don’t spur feelings of goodwill or safety. But for those who support the Animal Liberation Front (ALF), images of masked activists holding rescued animals serve as powerful emblems of freedom.

Denounced as extremists and terrorists by some, and celebrated as heroes and freedom fighters by others, ALF activists remain highly controversial players within today’s animal movements. Underground by nature, their personal stories often remain untold, or mediated by others. Yet, the documentary Behind the Mask attempts to change that, and thus challenge the negative perceptions surrounding these people and their actions.

In this interview with attorney and first-time director Shannon Keith, we explore her award-winning film that details the perspectives of ALF activists and others who engage in direct action for animals. As a follow-up conversation to our (pre-film release) 2005 interview, Keith describes responses to the film, the editorial process, and her experiences meeting convicted ALF activists. Further, as a legal defender of activists and a prosecutor of animal cruelty cases, she not only takes us behind the scenes of the documentary, but also behind her own FBI file and the industries that profit from animal abuse.