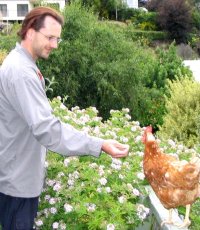 Q: Why did the chicken cross the road? (To escape the factory farm? To find somewhere good to dust bathe?)

A: Or, maybe, the chicken crossed the road to knock on Philip Armstrong’s door.

In Armstrong’s prize-winning essay, “Sympathy”, he writes about a chicken who mysteriously appeared at his home and quickly made herself comfortable, roosting on the sofa or preening herself by the computer. Then, one day she seemed not quite herself, so Philip and his partner set off to the vet, where they were soon confronted with the common attitude that dismisses the lives of some animals, such as chickens. “So why is sympathy for other life forms so trivialized today?” asks Armstrong, especially given that at one time “sympathy was considered one of the most precious, admirable and progressive of virtues.” He suggests that historical forces that comprise industry, objectivity in science and the emergence of capitalism, collided over the same period, “At which point sympathy for animals — at least for any type of animal that can be turned into a resource — becomes terminally uneconomical.”

Armstrong’s recent scholarship at the University of Canterbury’s “School of Culture, Literature and Society” in the English Programme “involves analysis of the human-animal relationship, as expressed in cultural representations and practices, especially in the contexts of colonialism, decolonisation and globalisation.” In our conversation, we’ll discuss some of the links between postcolonial theory and human-animal studies, including a discussion of his article, “The Postcolonial Animal.” Drawing upon examples from literature, activism, and his New Zealand context, we’ll hear from one of today’s most exciting human-animal studies scholars.

Philip Armstrong is the director of The New Zealand Centre for Human-Animal Studies (NZCHAS), which includes scholars from the humanities and social sciences “whose research focuses on the conceptual and material treatment of non-human animals in culture, society and history.” Armstrong is also the editor of Knowing Animals, and his book What Animals Mean in the Fiction of Modernity is about to be published with Routledge. He teaches classes on postcolonial writing, cultural studies, and human-animal studies, including the Honours course “Postcolonial Writing: Animals and Settlement.”