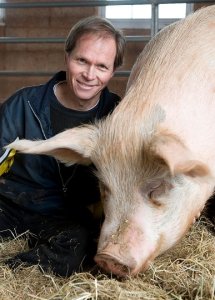 This week, we speak with independent animal behavior scientist and author, Jonathan Balcome. We last spoke with Jonathan back in 2006 when his book, “Pleasurable Kingdom: Animals and the Nature of Feeling Good” was released.

On this show, we discuss both last year’s “Second Nature: The Inner Lives of Animals” as well as Dr. Balcombe’s upcoming “The Exultant Ark: A Pictorial Tour of Animal Pleasure”, due out in May, 2011.

We talk with Dr. Balcombe about some amazing examples of animal’s internal subjective experiences and their own “umwelt” or life worlds. We also discuss the trend of rampant anthropocentrism within the natural sciences and the tendency for biologists to explain all animal behaviour through reductionist evolutionary explanations. Finally, Jonathan tells us a little bit about his new book, which is sure to delight and amaze with its vivid photography and interesting explanations.

One thought on “Unpacking The Animal “Umwelt”: A Discussion with Jonathan Balcombe”