When Derek Walter and Steve Jenkins welcomed Esther the “micropig” into their home, they had no idea she would grow to 400 pounds — and change the direction of their lives! Through her Facebook page, Esther has touched the hearts (and changed the diets) of people worldwide. Then, we catch up with Chris and Jon, the team behind YouTube hit cooking show The Vegan Zombie. They just released the cookbook their fans have been asking for — and threw in a comic book adventure to boot! END_OF_DOCUMENT_TOKEN_TO_BE_REPLACED 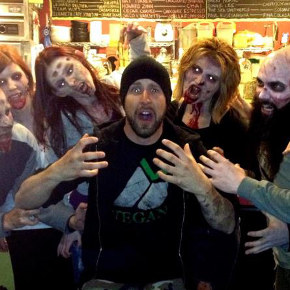 A post-apocalyptic cooking show? A host who battles the living dead when he’s not sneaking into abandoned kitchens and cooking up delicious vegan comfort food? It sounds like an unlikely recipe for success, but Chris and Jon, creators of The Vegan Zombie, have produced a bona fide hit. END_OF_DOCUMENT_TOKEN_TO_BE_REPLACED