In 2010, John Fitzgerald spoke with Animal Voices about hare coursing, a “sport” in which captured wild hares are made to run for their lives from greyhounds. Now, Fitzgerald returns to tell us about a landmark event in animal protection in Ireland: the first updates to anti-cruelty laws in over a century. 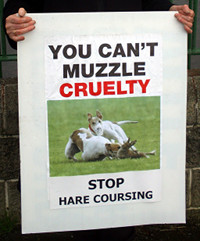 Animal advocates want the new law to ban hare coursing and fox hunting. These blood sports have more victims than just the hares and foxes: the greyhounds sent after the hares, and the terriers sent into holes to kill hiding foxes, also suffer for the sake of human entertainment.

The pro-animal campaigners have some powerful allies, such as politicians Maureen O’Sullivan and Clare Davy, and even Prime Minister Enda Kenny has admitted a personal dislike of hare coursing. The pro-blood sports lobby, however, is well-funded and has attracted a range of allies from hunters to Spanish bullfighters, who fear that their practices may be the next to go if hare coursing and fox hunting are outlawed. Visit BanBloodSports.com for updates, petitions, and more!