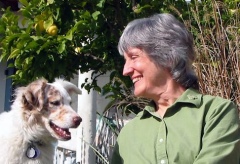 In this interview we speak with Dr. Donna Haraway about her new book,When Species Meet. Haraway is well-known for her cyborg-related scholarship, through such essays as “A Cyborg Manifesto: Science, Technology, and Socialist-Feminism in the Late Twentieth Century.” Though not abandoned, the cyborg now rides sidecar to “companion species,” the driving figure in her current work.

Born of real infoldings of flesh, trust, and respect, “companion species” entails lived relations of significant otherness. In her own words, “When Species Meet is about the entanglements of beings in technoculture that work through reciprocal inductions to shape companion species.” The book is greatly informed by a cross-species sport called agility. In particular, When Species Meet introduces us to two dogs, Cayenne and Roland, her partners in the practice. Importantly, though, “companion species” also resonates beyond human-dog relationships, and maneuvers through, in, and around all sorts of fascinating terrain.

Donna Haraway is a Professor in the History of Consciousness Department at the University of California, Santa Cruz. She received her Ph.D. in Biology from Yale in 1972. In 2000, Haraway earned the J.D. Bernal Prize, a lifetime achievement award from the Society for Social Studies of Science. A scholar of feminist theory, animal studies, cultural and historical studies of modern science and technology, she is the author of numerous books, such as The Companion Species Manifesto: Dogs, People, and Significant Otherness; Modest_Witness@Second_Millennium. FemaleMan©_Meets_OncoMouse™: Feminism and Technoscience; Simians, Cyborgs, and Women: The Reinvention of Nature; and Primate Visions: Gender, Race, and Nature in the World of Modern Science.