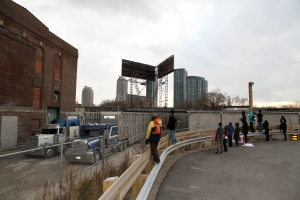 This week, we speak with Anita Krajnc from the Toronto Pig Save and Patti Blersch of the newly-created Burlington Pig Save. The Toronto Pig Save is a collective of artists, activists and writers based right here in Toronto; the group’s almost weekly protests bear witness to the suffering of pigs en route to Toronto’s biggest slaughterhouse, Quality Meat Packers. The protests have become something of a hub for Southern Ontario animal activists, drawing in many important figures from various other Toronto-based groups including ARK II, the University of Toronto Animal Rights Group, The Love and Rage Liberation Collective and the newly-created Stop York Animal Testing.

3 thoughts on “Bearing Witness with the Toronto Pig Save”