“On that day when Maple Leaf representatives were there conducting their audit, a pig gave birth. Workers moved her out of her gestation crate, killed all of her piglets in front of her, and later she went and laid down beside her dead piglets.” 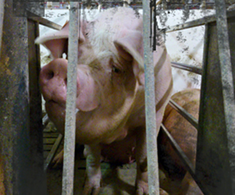 Animal Voices is joined by Twyla Francois, director of investigations for Mercy For Animals Canada, to speak about their recent undercover work at a Manitoba pig farm. The video footage, aired on the prestigious news program W5, has horrified Canadians by revealing practices like “thumping”, or smashing piglets to death against concrete. And the pork industry has presented anything but a unified front in response to the investigation, with Maple Leaf Foods condemning the acts seen in the video as “disturbing” and “not tolerated”, while the Manitoba Pork Council and a trio of experts defended them as “humane” and “part of doing business”.

From the big-picture statistics to the stories of individual pigs — like 21401, who would run over to play when called by a whistle, but was shipped off to her death for taking too long to come into heat — Francois takes us inside a world where regulations are vague and suffering is accepted as the norm. She asks that listeners consider signing a petition to ask Canada’s largest grocery chains to refuse to sell meat from companies that use the practices seen in the video, and try going veg too!