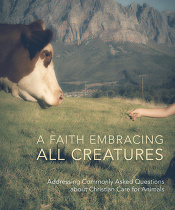 Andy Alexis-Baker discusses A Faith Embracing All Creatures, a new edited volume that addresses some of the most common questions asked to and by Christian Vegetarians and Vegans. Authors such as Carol Adams and Stephen R.L. Clark tackle such questions as “Didn’t God give man dominion over animals?”, “Doesn’t Christianity regard humans as superior to animals?” and, of course, “Was Jesus a Vegetarian?”

Whether you’re a Christian trying to reconcile your compassion for animals with your faith, an animal activist trying to engage with Christians, or just fascinated by religious history and the nuances of Christian scripture, this interview is sure to captivate!

6 thoughts on “So was Jesus a Vegetarian? A Faith Embracing All Creatures addresses Christian Vegans’ Most Frequently Asked Questions”